It was an easy drive and I was looking forward to it: driving from Adelaide to Alice Springs along the Stuart Highway.

It’s a journey I’ve done many times before, both on my own and with my partner, Gary.

This time, I was alone and driving home a car that one of our daughters had just bought in Adelaide.

Yes, that’s right – I was a female driving 1500km alone in the outback.

But this time, the drive home to Alice Springs was different.

600 kilometres from home, in the middle of nowhere, I broke down. 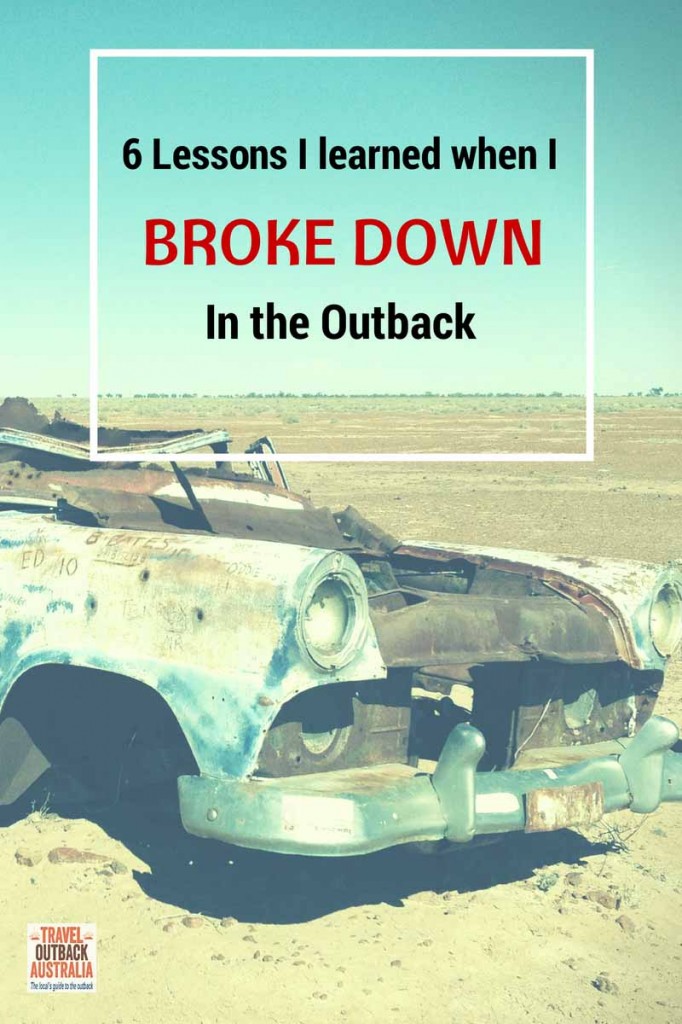 This is the story of the lessons I learned – and what you should do if your car breaks down outback.

It was Sunday morning, late November, and I was driving a tiny little Holden Barina, a 4 cylinder manual car that’s quite common in Australia.

On the very edge of Coober Pedy’s mobile phone reception – the LAST mobile phone coverage until Marla, over 200km away up the highway- I heard a loud THUD-THUD-THUD sound coming from under the bonnet. 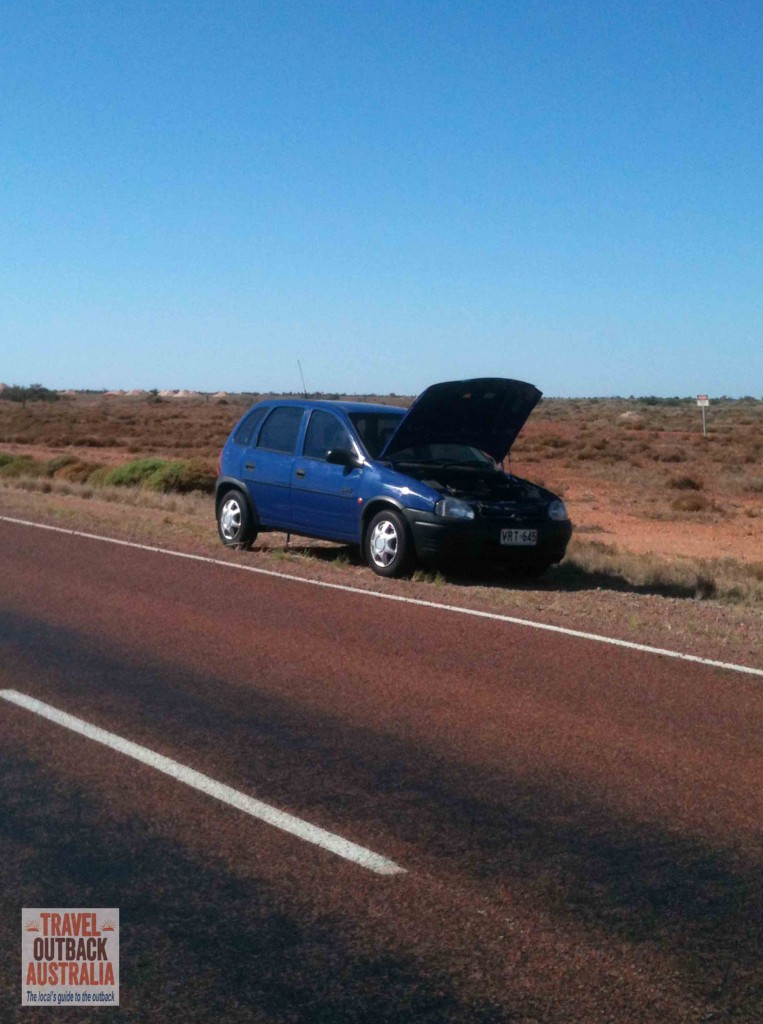 Cursing, I pulled up straight away and stopped the car.

I poked around under the hood for a little while, suspecting the worst.

Starting the car again, I soon figured out the problem: the fan belt was fraying, and a large piece had come loose and was flapping around, hitting the bonnet and engine as it turned.

No problem, I thought, I’ve changed a fanbelt before.

I always travel with common spare parts. I happened to have a spare fanbelt in the car and a few basic tools with me as well.

Unlike the fanbelts in the older Toyota Landcruisers and Holden Commodores that I’d changed, the Barina’s fanbelt was unique. 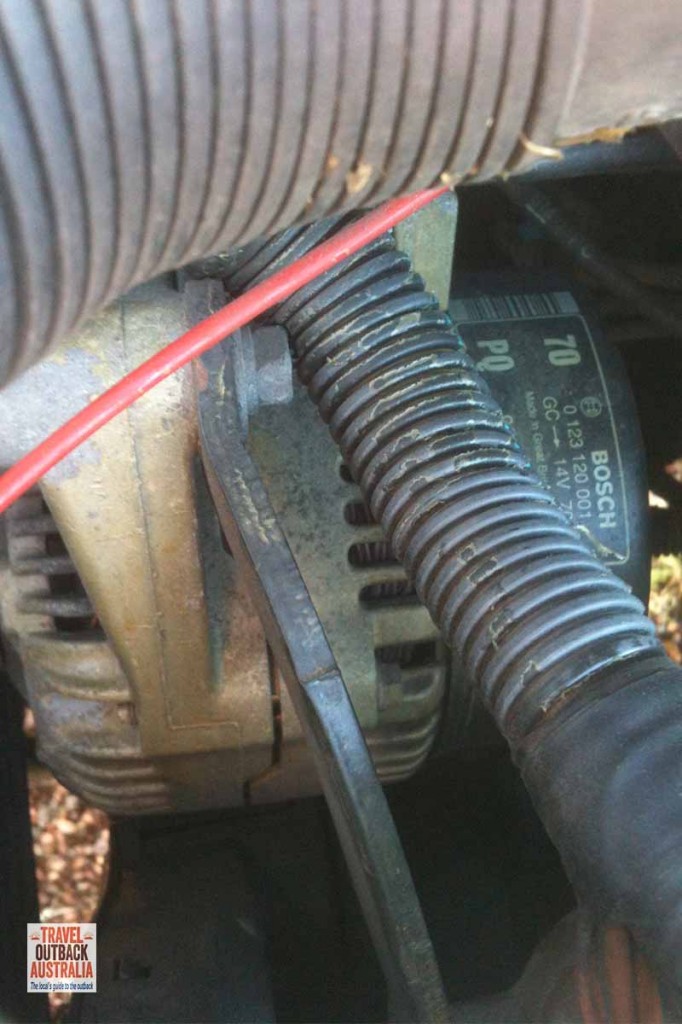 The engine was mounted SIDEWAYS under the hood and there was no visible way for me to undo the fanbelt.

I began to panic…

Here I was early on a Sunday morning in the middle of nowhere with 600km to go, and I couldn’t even do a basic repair on this little beast of car…

I reached for the mobile phone.

I was REALLY lucky.

There was just enough reception to call Gary, at home in Alice Springs.

I explained that I’d broken down and sent him a photo of the fanbelt and its mount.  I told him approximately where I was, and asked him to call the Royal Automobile Association’s office (RAA) in Coober Pedy.

After hanging up, I waited.

Soon, Gary called back and told me the RAA was on its way. He sounded worried – I was alone and in the hands of strangers. I assured him I’d be okay. 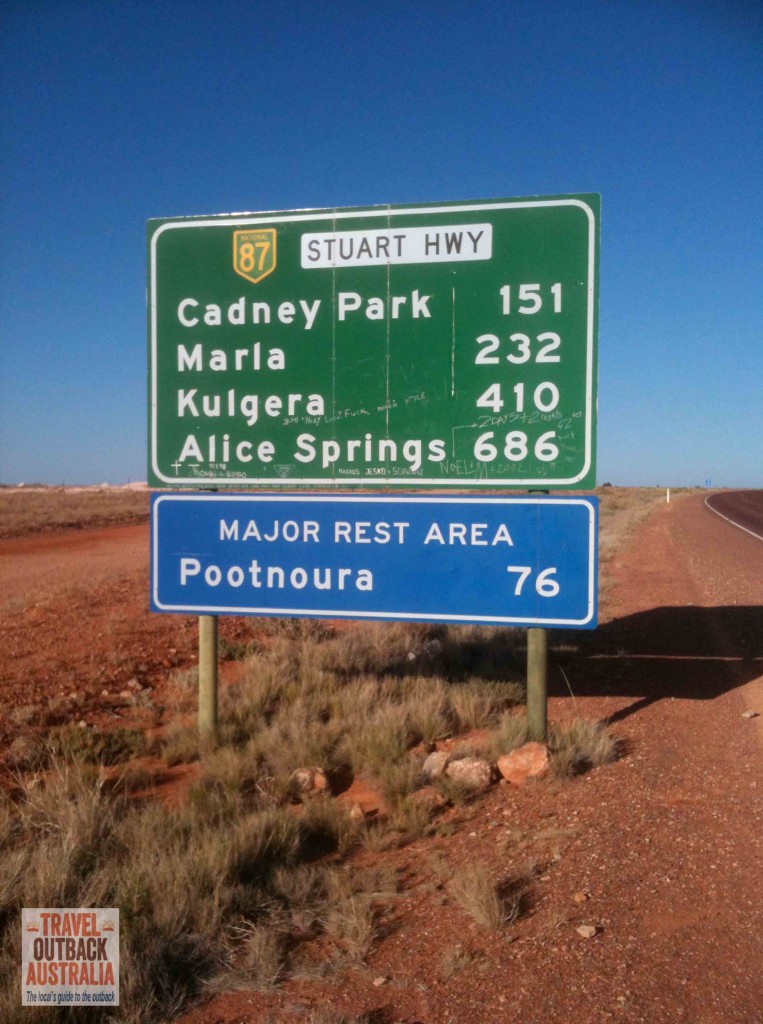 Several people stopped and asked me if I was alright, offering me lifts into Coober Pedy and a tow. I thanked them and explained that the RAA was on its way.

They might have looked at me dubiously – after all, I was a woman alone in the outback-  but I assured them that I was fine.

After about 20 minutes, the RAA man came.

He trimmed my fanbelt, and I was able to drive the car back to Coober Pedy, following him.

What happened next was a story in itself.

The RAA man was absolutely stumped.

He’d never seen a fanbelt so difficult to get at before. After several hours of trying, cussing and sweating, we had to Google the workshop manual and read what needed to be done. 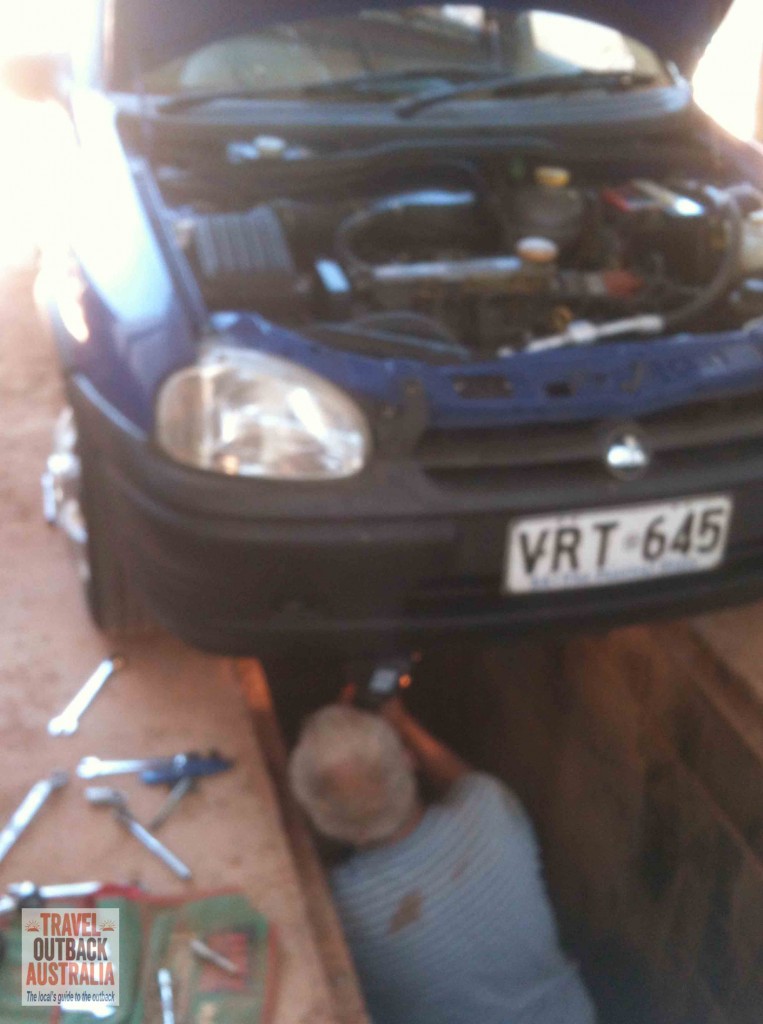 Very blurry photo but you get the idea

It turned out that the entire engine had to be undone from its mounts in order to change the fanbelt. It wasn’t a one person job – you needed several sets of hands.

So the kind RAA man called on some friends. Even though it was Sunday afternoon, they quickly arrived and after another hour, the fanbelt was finally changed.

There was no way I could have done this on my own.

I thanked the RAA man and his friends – they wouldn’t accept a carton of beer as thanks from me, either.

After 6 hours in Coober Pedy, and a lot of frustration from all of us – I was on my way again.

That night I slept at Cadney Roadhouse, then I made it home with no further problems.

This break down could have been much, much worse if I hadn’t been prepared and had my wits about me.

In some respects, I was very lucky, breaking down where I did and having the RAA man able to come and get me.

Even so, I learned a lot about myself and what to do when the shit hits the fan, you’re alone and you’re in the middle of nowhere, outback Australia.

Here’s 6 lessons I learned after breaking down in the outback:

Even though I couldn’t fix the car myself, I had the exact fanbelt that was needed. If I hadn’t had one, I would have had a long wait for the part to be sent from Alice Springs or Port Augusta.

This made my breakdown much easier than it might have been.

When driving outback, take fanbelts, radiator hoses, fuses, oil, WD40, spare water & radiator coolant as the basics. Other simple things that you might want are a handful of screws of various sizes and wire for securing things.

Also, make sure you’ve got a range of spanners that actually fit your car, and a screwdriver with interchangeable bits. 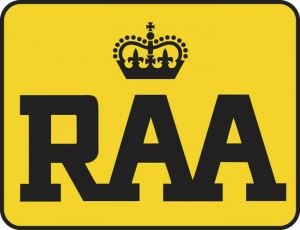 I really want to shout this at you: join the RAA, NRMA, AANT – whatever it is in your state.

I’ve broken down twice and both times, the RAA has saved my skin.

I have a Premium Membership that not only includes emergency callouts, but accommodation and recovery (vehicle towing) as well.

Don’t be a tightarse. Get it.

3. Have a means of emergency communication

I was VERY lucky.

I broke down where there was still mobile coverage.

However, there are other options for emergency communications which you may want to consider.

Had I broken down outside of phone reception and as a woman, was wary of accepting help from strangers, I would have asked a passing motorist to contact both Gary (my partner) and the RAA when they got to Coober Pedy. I would have written all of my details on a piece of paper for them to pass the message along.

If you’re really worried about your message getting through, send it with 2 different motorists, just to be sure.

If I had broken down on a remote, bush track or a dirt road, I would not have left my car – more on that below.

Other options are to carry a satellite phone or to get a DeLorme personal locator beacon.

I NEVER carry a sat phone when I’m travelling on the Stuart Highway. This is a well-travelled road, there is a lot of passing traffic, and people will stop and help you.

However, as soon as I’m travelling off main, bitumen highways in the outback, I take a sat phone with me.

You can hire satphones (check this page out), or opt for a DeLorme  personal location beacon.

4. Stay with your car 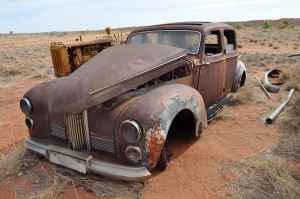 People who perish in the outback are generally people who leave their cars and start walking – especially in the summer heat.

If you break down in the middle of nowhere, STAY WITH YOUR CAR until someone else comes along.

It’s really simple: if police or emergency services need to come looking for you, a car is bigger and easier to find than a person.

Also, your car will provide some shelter – either shade or warmth.

So please, don’t be an idiot. Stay with your car.

It could save your life.

(Read this story here to see what happens when people don’t stay with their cars).

Before you leave home, go through an outback breakdown scenario in your head. Think about what you would do. Have a plan. Write it down if you need to.

Breaking down in the outback is common.

It happens every day – and you never hear about it.

Keep a calm head and think through your options.

You will be able to find help – especially if you’ve planned what you’d do in an emergency before you leave home.

6. Thirst and heat WILL kill you – other travellers won’t

This probably sounds like common sense, but carry water and some emergency food with you.

I had 12 litres of water when I broke down. I also had about a day’s worth of snacks.

The biggest cause of death in the outback is not backpacker murderers, deranged psychopaths, snakes or spiders but HEAT and thirst.

Take more water than you need – a 20 litre container is ideal.

Remember this. It could save your life.

Also, be aware that people will stop to help you in the outback – especially if you’re a woman travelling alone: families, Grey Nomads, truckies, station people, Aboriginal people from local communities… even overseas backpackers will all stop and check to see that you’re ok.

Use your commonsense when accepting help –if someone feels shady or suspect, then say no, but keep in mind that 99% of people are honest, decent people.

People will stop and help you. It’s what we do out here.

Read What Other People Have Done

I can hear you saying: well that’s fine for YOU, Amanda, you do remote area bushwork all the time. You know what to do.

So I’ve found some articles written by other people, explaining what THEY did when they broke down outback. These are all ordinary people -not mechanics or even people who travel the outback for a living like I do.

These people all have one thing in common: they’re sensible travellers who’ve broken down outback.

Please help us and the other people whose stories we’ve shared by SHARING this post far and wide.

You’ll help other travellers stay safe and know what to do if they break down.

Who knows, you could be saving someone’s life.

If  YOU have any great tips to add OR you’ve broken down in the outback, PLEASE leave them in comments below – your advice could really help someone out.