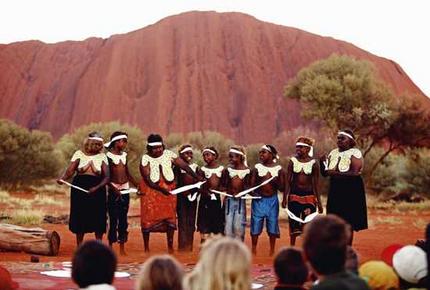 Have you ever wondered how many Aboriginal languages there are in Australia?

A surprising number of people think Aboriginal people have only one language. A few people guess there are 5 or 10 languages.

The reality is there are about 50 different languages (with about 200 dialects) spoken by Aboriginal people today.

On these pages, I tell you about the history of indigenous languages, what these languages are like, which ones are spoken in the Outback, and where to actually learn languages.

Linguists estimate that when Europeans first came to Australian in 1778, Aboriginal people spoke about 250 different languages. 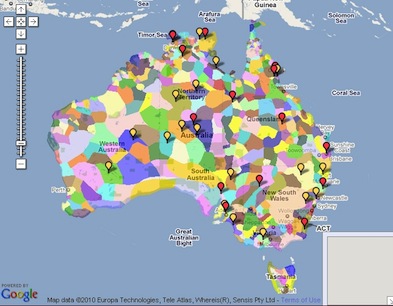 This map shows approximately how many Aboriginal languages there were in Australia. Many of these languages are now extinct.

Click here to see an interactive version of this map.

From the very beginning of white settlement in Australia, Aboriginal languages were thought to be inferior to English and were discouraged. In a very few years after settlement, Eora, one of the languages of Sydney, became extinct.

Over the next 200 years, Aboriginal people were discouraged and even punished for speaking their languages.

Once children stopped learning their parents’ or grandparents’ languages, these languages began to fade.

Linguists working on Cape York in Queensland in the 1970s found that such a change could take place relatively quickly. After only 40 years without being passed on to younger generations, languages started to die.

Today, there are only about 50 or so Indigenous languages spoken in Australia. Of these, only 20 have more than a 1000 speakers and are likely to survive into the future.

The exact number depends on how linguists choose to classify them and where you draw line to define the Outback!

In Central Australia, the main languages are:

Arrernte is actually the name of a ‘family’ of languages, and has Alyawarre, Kayteye and Anmatyerre which are often classed as separate languages.

All Central Australian languages have a number of dialects, some of which have even have their own names – like Pertame for Southern Arrernte.

Dialects can be quite distinct, using different words and sounds to their close neighbours.

Some languages have a very distinct sound.

When you’re walking around Alice Springs, with a little knowledge, it’s easy to hear the difference between the harsher sounds of Arrernte and the more musical sounds of Pitjantjatjara.

Aboriginal people have languages that are quite different in structure from languages outside of Australia.

This means that Aboriginal peoples and languages are as varied and different as Spanish is to French, German, Swedish, Russian, Finnish or English.

Linguists have had a lot of trouble trying to categorise or classify Aboriginal language into groups. They’ve come up with two very broad categories: 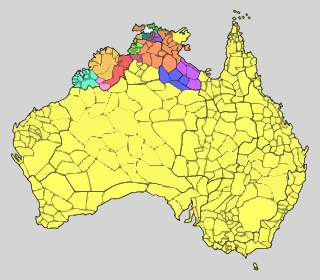 In most Pama-Nyngan languages, new meanings are formed by adding suffixes onto verbs and nouns, rather than changing the word order as we do in English.

Words like ‘I’ or ‘is’ are not always used. So, an English sentence like: the child is hungry, in many Aboriginal languages is simply ‘child hungry‘.

In Arrernte, the language spoken around Alice Springs, this sentence would be:

There are also lots of specialised words people and family members in Pama-Nyungan languages.

For example, where we call mother’s mother and father’s mother ‘grandmother’ in English, in Aboriginal languages there are separate words for each of these grandmothers.

Where to Learn Aboriginal Languages

At present, there aren’t many places to go to learn indigenous languages.

For many years, the Institute of Aboriginal Development (IAD) in Alice Springs taught Pitjantjatjara, Warlpiri, Arrernte and sometimes, Pintubi lessons.

However, IAD is no longer teaching language courses. This is a tragic loss.

It is now very hard to learn the main languages spoken by Aboriginal people in Central Australia.

Currently, there are no ongoing Warlpiri language courses.

However, the Papulu Apparr-Kari Language Centre in Tennant Creek may be able to provide private Warlpiri and Warumangu language lessons.

When I started learning Warlpiri I found the Papulu Apparr people to be incredibly helpful. Visit them here

Pitjantjatjara is the only Central Australian language with any reasonable courses.

The University of South Australia runs a once a year summer school in Pitjantjatjara. This course fills up very quickly and I’ve heard very good things about it.

Learn more about this course here

A Plea For Language Education

When I came to Alice Springs a decade ago, I was very fortunate to be able to take three lots of Arrernte courses. As a result I can now have a reasonable conversation in Arrernte.

This opportunity no longer exists.

Language is a window into the minds and hearts of a people. It opens doors and brings people together. It also helps those of us who live and work with Aboriginal people to understand each other.

Thank you for reading these pages and taking the time to learn a little more about Indigenous languages.