What You Need to Know BEFORE You Book

Ever seen those photos of 3 course dinners under the stars at Ayers Rock luxury hotels?

Wondered if they’re worth the expense?

The aim of this page is to give you an honest, opinion of Ayers Rock’s luxury hotels. Personally, we don’t think they’re worth it.

Let us warn you now: Ayers Rock luxury hotels are extremely expensive. We feel that the prices being charged are very hard to justify.

The company which owns all of Ayers Rock resort has a monopoly and loves to exploit it.

Unfortunately, a former Northern Territory government did a dodgy deal with the company and let them set up both at Ayers Rock and Kings Canyon without any competition.

We can only hope that the new Aboriginal owners of Ayer Rock resort will see that the luxury accommodation – along with the rest of the accommodation- is outrageously priced and that visitor numbers are falling, and will do something about it.

Sails in The Desert

Sails in the Desert Hotel is one of only two Ayers Rock luxury hotels. 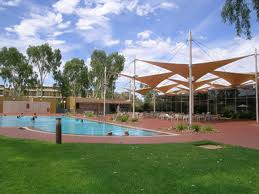 There are three room choices at Sails: Standard rooms, Spa Rooms and Deluxe Suites. None of the rooms have kitchens.

Standard Rooms have twin queen beds or a deluxe king, and can accommodate up to five people.

Rates start at $480 per night (per room) for the summer period, and go up to $580 per night during the peak winter season (July-August).

Spa Rooms have (you guessed it!) an open-air spa on the balcony, and come with a deluxe king or twin queen beds.

Each suite has a separate balcony off the living room and bedrooms, overlooking the resort’s gardens. And of course, there’s a spa! It’s inside, though. 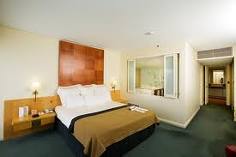 Let’s face it. The word ‘suite’ means that any room is going to be expensive.

Unless our workplaces pay for accommodation at Sails in the Desert, we can assure you, we’ll stick to Emu Walk Apartments. Or camping.

One good thing about Sails in the Desert – it’s located right in the centre of Yulara’s shops and has a fantastic Aboriginal and non-Aboriginal art gallery.

If you’re looking for dining options that are a little classier than Gecko’s or the Outback Pioneer Hotel’s self-serve BBQ, try Tali’s Bar. The light meals will set you back about $15 and the atmosphere is just right for kicking back to ponder Ayer’s Rock cultural contradictions!

Read more reviews and get cheapest rates for Sails in the Desert.

We’ll assume that money is the last thing on your mind if you’re going to stay here. 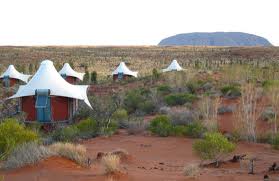 Longitude 131 is the most luxurious of the Ayers Rock luxury hotels. And it isn’t even a hotel.

It’s a bunch of 15 luxury ‘wilderness’ tents, set apart from the rest of Yulara and the Ayers Rock Resort.

Whilst we haven’t stayed here (and expect that we never will!), Longitude 131 gets rave reviews from those who do.

Included in the price of your tent (!) is a three-course dinner served under the stars, all meals and alcohol. Of course, you’ll need a lot of alcohol to wash away the thought of what you’re paying for!

Now, we hope you’re sitting down.

The nightly rate at Longitude 131 starts at $2040 per night. Note that you have to stay a minimum of two nights and children under 12 are not allowed. 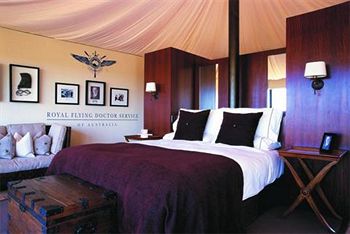 Whilst dinner under the stars might be incredible for most city-dwellers, rolling out a swag anywhere in Outback Australia, with dinner and a glass of red wine will give you the same experience at none of the cost!

Personally, we find this level of expense very hard to justify. The tents are nice, sure, and the food is probably great – but at over $4000 for two nights, we’ll stick to our swags!

Hopefully, you’ve picked yourself up off the floor now you’ve seen the price of the Ayers Rock luxury hotels. Thankfully, there’s plenty of other accommodation options at Uluru.

Read more reviews of and get rates for Longitude 131.

After viewing the prices here, you’ll probably want to head straight over to our Ayers Rock Budget Hotels page .

If parting with $400-$600 per night seems a little more reasonable, then check out our page of middle of the range Ayers Rock hotels.