This page will help you choose the best time to visit Uluru.
Below, you’ll find information on Ayers Rock weather, climate, temperatures and rainfall, along with our recommendations for when to visit one of Australia’s best known places.

Ayers Rock’s climate can be described as ‘arid’.

Rainfall is low, averaging only 308 mm per year.

So if you see rain on Ayers Rock, take a photo! You’re one of the lucky few.

Uluru/ Kata Tjuta is very hot in summer, but temperate in winter. People are often surprised to find out that winter nights at Ayers Rock Resort can fall below freezing.

This is because it’s located in the middle of a semi-arid desert. As there’s not a lot of warm moist air (like there is in coastal regions), temperatures vary dramatically.

Daily temperatures range from 5C in July to 42C in January!

Please remember that seasons in Australia (and Ayers Rock) are the opposite to those in the Northern Hemisphere.

Australia’s summers are from December to February, and winters are from June to August. If you’re thinking about visiting, then don’t forget this important fact.

The Yankunytjatjara people, who are the Traditional Owners of Uluru, have a very detailed understanding of Ayers Rock weather patterns, derived from careful observation of animals, birds, plants, and of course, the sky!

Whilst we won’t go into detail about these things on this page, you might be interested to know that Yankunytjatjara people recognise five seasons:

Our Ayers Rock Aboriginal Culture page talks more about Uluru’s Aboriginal people and dispells many of the myths about them.

Weather  at Uluru can be extreme.

Ayers Rock temperatures average 37-40C in summer and 18-20C in winter. However, summer temperatures in Desert of 45C have been recorded.

As with most places in the Outback, January and February are the hottest months of the year.

July is generally the coolest month Uluru Kata Tjuta National Park. The temperature can drop below freezing, and frosts occur on 50% of mornings.

This graph shows the average minimum and maximum temperatures for each month. Please note that ALL temperatures are in degrees Celcius, not Fahrenheit, because that’s what we use in Australia.

Believe it or not, Uluru’s weather is heavily influenced by tropical lows and cyclones (also called hurricanes in the US).

That’s right. If there’s a cyclone way up in the Kimberly region of Western Australia, it might travel all the way down through the Red Centre to Uluru Kata Tjuta.

So tropical cyclones are the main influence upon Ayers Rock rainfall.

Rainfall at Ayers Rock averages 308mm (about 12 inches) rain each year. Like many other place in the Outback, Uluru’s rainfall is unpredictable.

More rain occurs during the summer, although rain can fall at any time of the year. 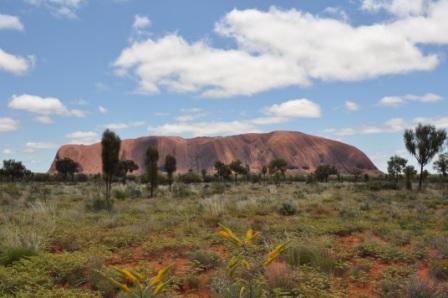 When is the best time to visit Uluru?

That depends on what you want to do.

If you just want to see Ayers Rock and take a few photographs of the Uluru sunrise or sunset, you can visit at any time of the year.

If you want to climb Uluru or do any of the walks around Ayers Rock or Kata Tjuta, then the cooler months of the year (May to September) are the best.

If you want to take amazing photographs, we’ve been told by a local professional photographer in Alice Springs that September is the best time.

Our Ayers Rock Budget Tips and Tricks page also provides vital information that will help you choose the best time to visit Uluru.