Back in June of 2016 we put Cooper S/T Maxx tyres on our Prado. I’m not a fan of the OEM tyres fitted from the factory and although the Dunlop’s still had tread they were making way for the new tyres.

Unsure how the new tyres would go after owning Coopers previously we started touring the Simpson Desert and surrounds. These tyres are a 50% road & sand, 50% dirt & mud so this type of tyre suited us to a tee.

Looking back over the last 6 years we have taken these tyres across the Simpson Desert 5 times and done our fair share of the black top as well. So, how have they gone? 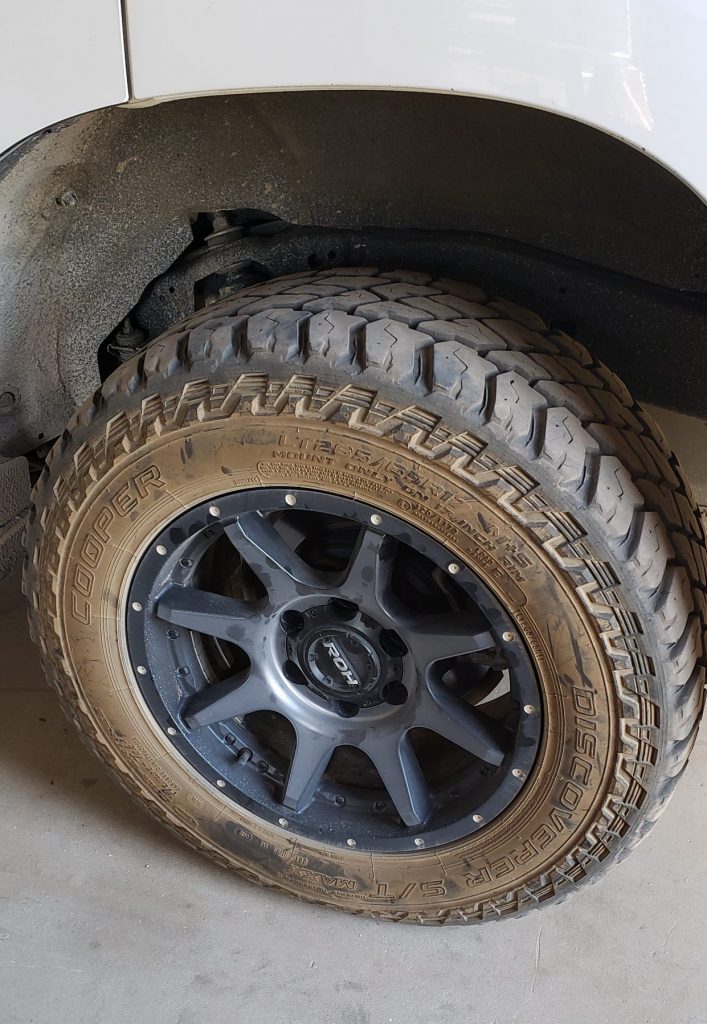 I’ve got to say that I have been very impressed with the wear on these tyres especially. These tyres, starting off with a whopping 14mm of tread depth have only worn halfway and I’ve travelled approximately 90k kilometres on them thus far.

Travelling over all the different terrain types has given us a pretty good idea of just how well these tyres have performed. Tyre pressures have been varied for sand and dirt roads down to about 13psi in worst case scenarios up to 35psi for on the black top.

Wear has been quite equal across the whole set of tyres and we have rotated them about every 10k kilometres. Doing what we do you get to hear many stories about tyres, good and bad, and one thing I can say about these Coopers is that they have not let us down while touring.

That’s not to say that they have been indestructible for on a couple of occasions I’ve had to get some running repairs. The first one was a Tek screw that had worked its way in between the tread and thankfully I noticed it before it did any damage.

These are 3 ply light truck sidewalls but I’ve still managed to cut a gash here and there, probably more as a result of my driving than a fault of the tyres. Recently on a family trip to Sydney we had pulled up at a friend’s place only to hear air escaping and then noticed it was coming from one of those said gashes.

I was still able to repair the tyre and it continues to serve as a spare perched on the rear of the Prado.

So, what can I say about the Cooper Tires S/T Maxx tyres overall performance? Traction has been great in the wet, both on the road and in mud, and while I can notice some noise coming from the tyres I don’t find it too intrusive.

They clean well and most pebbles caught in the tread pattern seem to be flung off after a short amount of time. On sand and deflating the pressure to just under half the normal pressures it floats over most sand except for really soft stuff.

Only once have I had to go down to about 13psi but this was because I was towing a camper trailer. On wet unsealed roads grip is good but once it starts turning to mud, these 50/50 tread pattern tyres would be  outperformed by a dedicated mud tyre dramatically.

Even though the tread is sitting at about half depth I reckon I’ll get another 10-20k kilometres out of them before they are retired as they’ll be getting on to seven years old and they’ll need retiring.

I don’t hesitate to recommend Cooper Tires to people these days. I really couldn’t be happier with the run I’ve had out of them and I’ll be lining up for another set next time round.

To find out about the range of Cooper Tires available you can see them here.