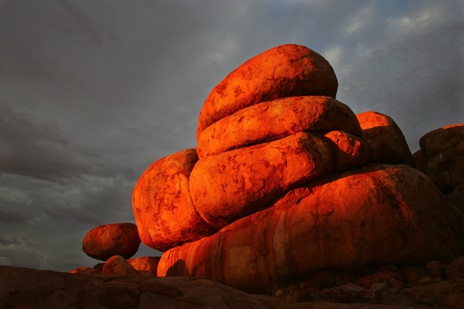 The Marbles is not just significant to Alyawarre people. It’s the meeting place of four different language groups: Alyawarre, Kayteye, Warumunga and Warlpiri people. All these Aboriginal groups have important spiritual connections and responsibilities for the area.

Aboriginal people should view this page with caution as it may contain pictures of deceased persons.

Like Uluru, Karlu Karlu is simply the place name for the area. It has no other meaning. The Alyawarre name for the entire area is Ayleparrarntenhe.

It is my hope that by reading this page, you will learn more about the living cultural traditions of the Devils Marbles.

In traditional Aboriginal culture, Alyawarre (and other Aboriginal people) were not free to visit all parts of the Devils Marbles as they pleased.

There were places that were considered so dangerous, that only certain Elders were allowed to visit them for important ceremonial purposes.

In fact, the part of Karlu Karlu where visitors now camp was strictly out of bounds for most Aboriginal people because it is a sacred site for both men and women.

Today, the whole area is protected under Northern Territory law as a Registered Sacred Site. 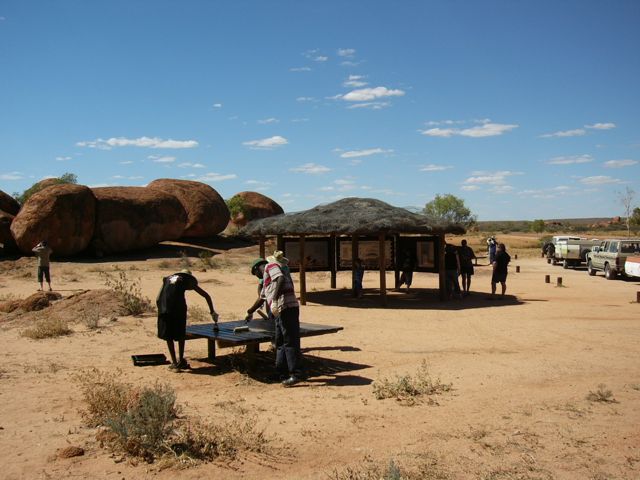 It’s very important to remember that Alyawarre Elders still hold the stories and songs for the area today. These senior people visit the central area to maintain these sites and teach younger men and women about the sacredness of this place.

In traditional times, the central part of the reserve was the only place open to all Alyawarre people to hunt and gather bush foods and medicines.

I’ve visited the reserve on a number of occasions with Alyawarre and Kayteye women, and we’ve gone gathering bush tucker.

The easiest bush tucker to find at the Marbles are native figs. However, there’s also Bush Bananas growing if you’re there in right season.

Some of the older ladies I was with remembered their mothers and grandmothers making seed cakes when they were young. These seed cakes look something like felafels, and are made from the collected seeds of the grasses growing around the Marbles. 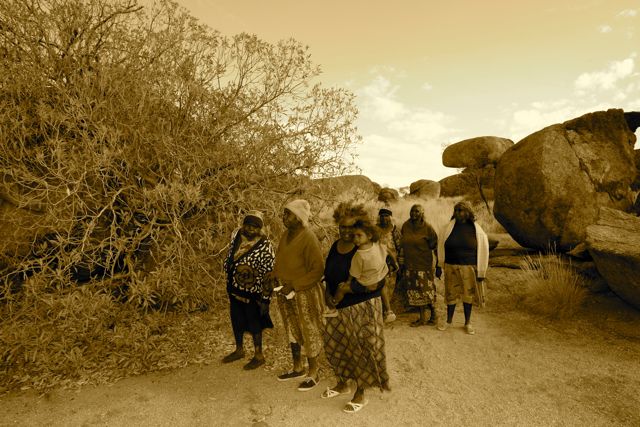 Aboriginal people also value the Marbles as place to find water. As water is a scarce resource in Central Australia, the small waterholes that can be found in the creek in north west of the reserve were particularly important to people camping or passing through.

There are even land crabs to be found at Karlu Karlu, that are particularly important and much loved bush tucker for Alyawarre people. 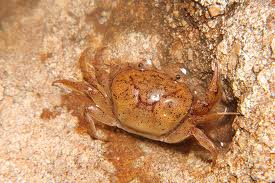 The Dreaming Story for the Marbles is also associated with a Devil Man, called Arrange (pronounced Ah-RRUNG-uh trill the double ‘r’ as in Spanish).

Some websites claim that the Marbles are the ‘eggs of the Rainbow Serpent’. Let me tell you this is absolutely WRONG!

I worked with the Aboriginal Owners of Karlu Karlu as part of the Reserve’s joint management program, and they were very upset to learn that people were telling this story. 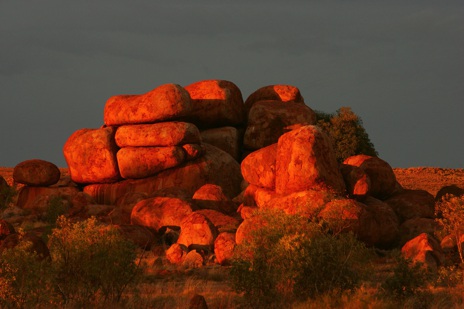 If you take anything away from this page, then please, take the true Dreaming Story for the Devils Marbles, not the incorrect, New Age-inspired one!

This is how Alyawarre people tell the story of how the Marbles were made:

Arrange, the Devil Man, came from Ayleparrarntenhe and travelled through the area. During his journey, he was making a hair belt (as worn by initiated men). Twirling the hair into strings, Arrange dropped clusters of hair on the ground.

These turned into the Karlu Karlu boulders that can be seen today. On his way back, Arrange spat on the ground. His spit also turned into the granite boulders which dot the central part of the reserve. Arrange finally returned to his place of origin, Ayleparrarntenhe. 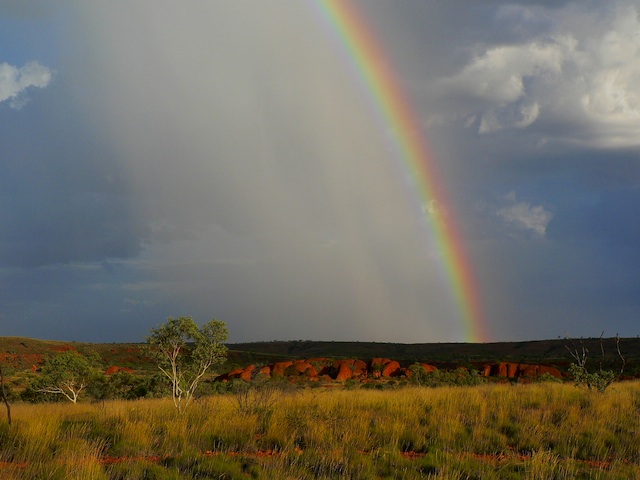 Ayleparrarntenhe is not only the correct name for this area, it is also the name of the twin-peaked hill to the east of the reserve where Arrange the Devil Man came from and returned to once he finished making the Marbles. He remains in these hills today.

The area is significant to both Aboriginal men and women, who hold separate and different stories, songs and ceremonies for the site.

Aboriginal Management of the Reserve

Since 2008, the Devils Marbles has been jointly managed by the Traditional Aboriginal Owners of the area and the Northern Territory Parks and Wildlife Service.

Senior Traditional Owners sit on a management committee that oversees the management of the reserve together with rangers. 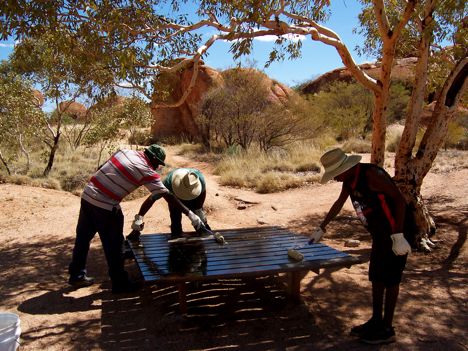 A small employment scheme sees young Aboriginal men and women looking after the reserve and learning from rangers. There is also a local Indigenous Ranger group in Tennant Creek, who also look after the reserve from time to time.

During the winter months, rangers have night time campfire talks where Senior Traditional Owners often come and tell Dreaming stories or stories about their lives to visitors.

It is important for visitors to the Reserve to know that many Traditional Owners live quite close to Karlu Karlu and visit it often. They ask that visitors respect their wishes and look after this special place.