Did Aboriginal people really live in the Simpson Desert?

For thousands of years Aboriginal people have lived permanently in the Simpson Desert.

Yet, the myth that the desert was uninhabited by people persists today.

On this page, we’re going to introduce you to Simpson Desert’s Aboriginal people and their rich culture and traditions.

You’ll learn who these Aboriginal people are, their importance as traders, how they were able to survive and a few of the main sacred Dreaming Stories.

And yes, Aboriginal people did indeed live permanently (and continue to live) in the Simpson Desert. Read on to find out why it’s time to put this myth to bed.

Debunking the Myth of the ‘Empty Desert’ 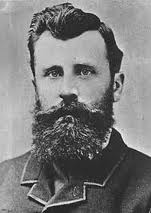 Aboriginal people have lived in and around the desert for at least 5000 years and continue to do so today.

When European explorers and scientists began to venture into the Simpson Desert in the late 19th and early 20th Centuries, it was widely thought that no one could possibly live in the harsh, waterless sand dunes.

Prominent European explorers such as Charles Winnecke and Dr Cecil Madigan helped to promote this myth. In 1883, Winnecke wrote:

“I am almost certain that this country has never been visited by natives.”

However, Aboriginal people themselves, along with archeological and anthropological research have proved this myth wrong.

Personal accounts and oral histories of Aboriginal people in the area are readily available to debunk this myth. The best known of these is the account of Mick McClean (Irinijili) and his sister, Topsy.

Retired linguist, Luise Hercus did extensive work with Mick and Topsy McClean in the 1970s, recording not only language but incredible detail about how Aboriginal people lived and survived in the Simpson Desert.

From Hercus’s important and very readable work, it’s clear that the Simpson Desert’s Aboriginal people did indeed live there permanently. 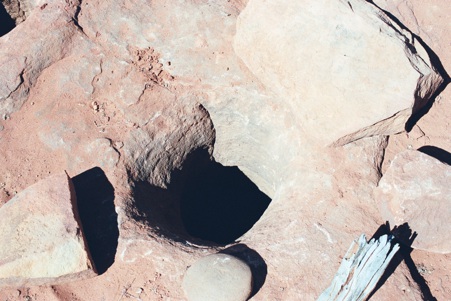 What’s more, it’s a number of lesser-known European explorers, such as David Lindsay and Ted Colson, also knew that Aboriginal people lived in the Simpson Desert and used their knowledge to explore the region.

Lindsay used the network of mikiri, or Aboriginal wells, as water sources on his 1886 journey into the desert. Colson used the help of Anterkarinya (local Aboriginal) man, Peter Ains, to cross the desert from west to east and then back again in 1933.

For the past 30 years, archeologists such as Dr Mike Smith and Dr Paul Tacon have undertaken extensive research regarding Simpson Desert Aboriginal people and their occupation of the desert.

Using evidence such as stone tools, campsites, shelters, human and animal bone fragments, archaeologists have been able to establish that Aboriginal people lived more or less continuously in the Simpson Desert for at least 5000 years.

As the Simpson Desert is an area that I (Amanda) have specialised in, I can also confirm that people who I’ve worked with also had stories of grandfathers and grandmothers and other family who lived in the desert. 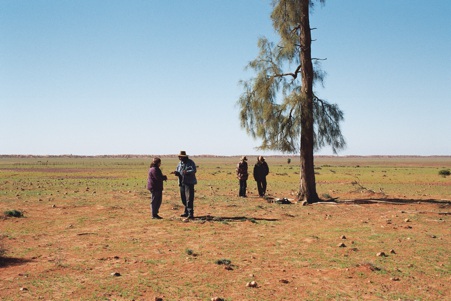 Fieldwork with Aboriginal people in the Simpson Desert

What’s more, they could name places and tell the stories for entire Dreaming Tracks crossing the desert. Some of these stories came from as far away as Port Augusta and Boulia.

It would seem clear to anyone, then, that the idea that Aboriginal people didn’t live in the Simpson Desert is a fiction.

Nothing more than a myth to add to the mystique of the Simpson Desert itself.

Aboriginal People of the Simpson Desert

You’re probably wanting to know exactly who the Aboriginal peoples are who live in this dry, remote area.

Before I answer that, I’m going to tell you something very important.

The correct term is simply ‘language group’ or ‘people’. 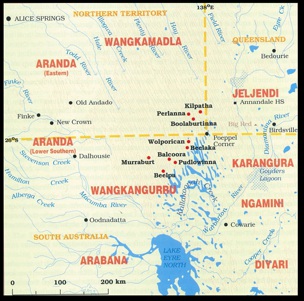 Image adapted from ‘The Simpson Desert’ by Mark Shephard

There are quite a few different Aboriginal peoples in the Simpson Desert:

Please note that the areas over which these people roam are not confined to state and territory boundaries which didn’t exist until white settlement.

How Did Aboriginal People Survive? 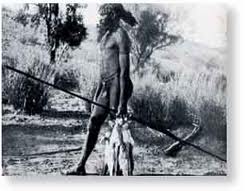 The Simpson Desert’s Aboriginal people were experts at surviving in this harsh, but not totally inhospitable, environment.

Aboriginal people travelled widely and would only camp in one place for several weeks at a time, hunting and foraging for food.

When food began to run low, people would get up and move on to another place.

These were not random places, though.

Aboriginal people living in the desert had a large system of mikiri or native wells where they would camp and draw precious water. The mikiri were the only source of permanent water in the desert.

There has been much speculation about the mikiri and how they were made.

One theory is that the Aboriginal people took advantage of places in the desert where there were low-lying depression in between dunes. In some of these places, the was a kind of gypseous flat.

It is speculated that Aboriginal people followed the flow of rainwater on these flats, and dug down through the sand, finding a layer of clay where water was trapped. Sometimes, this layer was 7 metres below the surface.

My own discussions with Anterkarinya people confirm that people did indeed dig deep to find these wells and had an extensive knowledge of their locations. Much of this knowledge has now been lost, even though the wells are slowly being rediscovered by contemporary explorers.

Bread and small felafel-like seed patties made from plentiful grasses and plants were a staple of the Simpson Desert’s Aboriginal people.

The plants which provided these seeds, such as nardoo (Marsilea drummondii), pigweed (Alzoon quadrifidum) and several species of native grasses, grew abundantly in places where moisture was captured.

As well as plants, Aboriginal people found plenty of game to hunt.

Birds, such as crested pigeons, wrens, budgerigars, galahs and emus, are plentiful in the Simpson, and provided a constant source of meat.

However, animals such as kangaroos, wallabies, bandicoots, hopping mice, native rats, lizards and even snakes and dingoes were also on the menu. 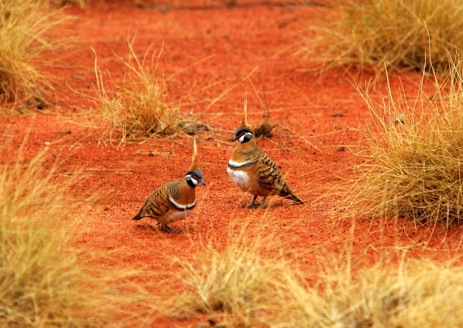 It’s important to let you know that materials to make stone tools for grinding seed, making knives and axes were very hard to find in the desert.

The Simpson Desert is criss-crossed with Aboriginal Dreaming Tracks and sacred sites.

Some of the most important Dreaming Stories in the Simpson Desert are associated with birds. For example, the sacred story associated with the Waddywood Trees (Acacia peuce) at the Mac Clarke Conservation Reserve is related to an Eaglehawk Dreaming story.

These rare and extremely long-lived Waddywood Trees represent two warring groups of men, one from the western side of the Simpson and the other from the east, who travelled around the desert, alternatively fighting as men and then transforming themselves into Eaglehawks.

This songline stretches all the way from Boulia in Queensland, across to Andado, then turns south and eventually finishes up at the Hugh River just outside of Maryvale, which is on the way to Chambers Pillar.

Another well known story is about groups of Rain Makers, a large group of men who were followed by a separate group of women. These people are like clouds, and travel north from Port Augusta and meander through the southern part of the desert, conducting ceremonies.

This Rain Maker story is one of the most sacred, and its details could only be known by very senior Elders, who’d learned a lot of sacred Law. Presumably, learning this Law would give them the power to perform ceremonies that would cause rain to fall.

Lastly, one of the best-known Dreaming Stories belonging to Simpson Desert Aboriginal people is one associated with an ancestral crane who lusted after two of his daughters-in-law.

This crane-man lead a group of people off into the desert, hoping to kill them and steal the young women for himself. His plans backfired when the people in the group smelled water at a nearby well.

They transformed themselves into waterbirds and saved themselves, whilst putting a curse on the well and the crane-man.

Please remember that these stories remain sacred and potent for Aboriginal people today. Those that are shared here are the ‘top’ story, the ‘sanatized’ version that strangers, women and children are allowed to hear.

There are several very good books which talk about Aboriginal culture in the Simpson in detail.

There’s also a number of very good academic articles that I can refer you to as well. Please email me (Amanda) for a list of these if you’re interested in learning more.

The two most readable books about Aboriginal people and culture in the Simpson Desert are:

Unfortunately, Shephard’s very enjoyable book (it’s a must for all Simpson Desert fans!) is long out of print. Copies sell occasionally on Ebay and through collectors at around $130 AUD.

The Making Connections book is still available at various bookstores and at the Strehlow Research Centre in Alice Springs.

I really hope you’ve enjoyed reading this page about Aboriginal culture in the Simpson Desert as much as I have enjoyed writing it.

If you have enjoyed learning about Simpson Desert Aboriginal people, please help me by sharing this important information using the ‘Share this page’ button below.