Battery packs seem to be all the rage now with lighter more efficient lithium batteries coming to the fore. Recently I got hold of the Bluetti EB55 537Wh LifePO4 battery pack for review.

In a relatively small form factor the EB55 packs a 700w output capable of charging up to 11 devices at once. Coming in a tad under 7.5kg it’s also not hard to carry around if you need a portable power supply.

Featuring a long-lasting LiFePO4 battery (only time will tell on this claim) and the advanced Battery Management System, the Bluetti EB55 will protect your devices from overload, overcurrent, short-circuit and over-temperature. We are told a user can expect 2500+ life cycles to 80% which is claimed to be 3-5 times longer than average Li-ion battery. 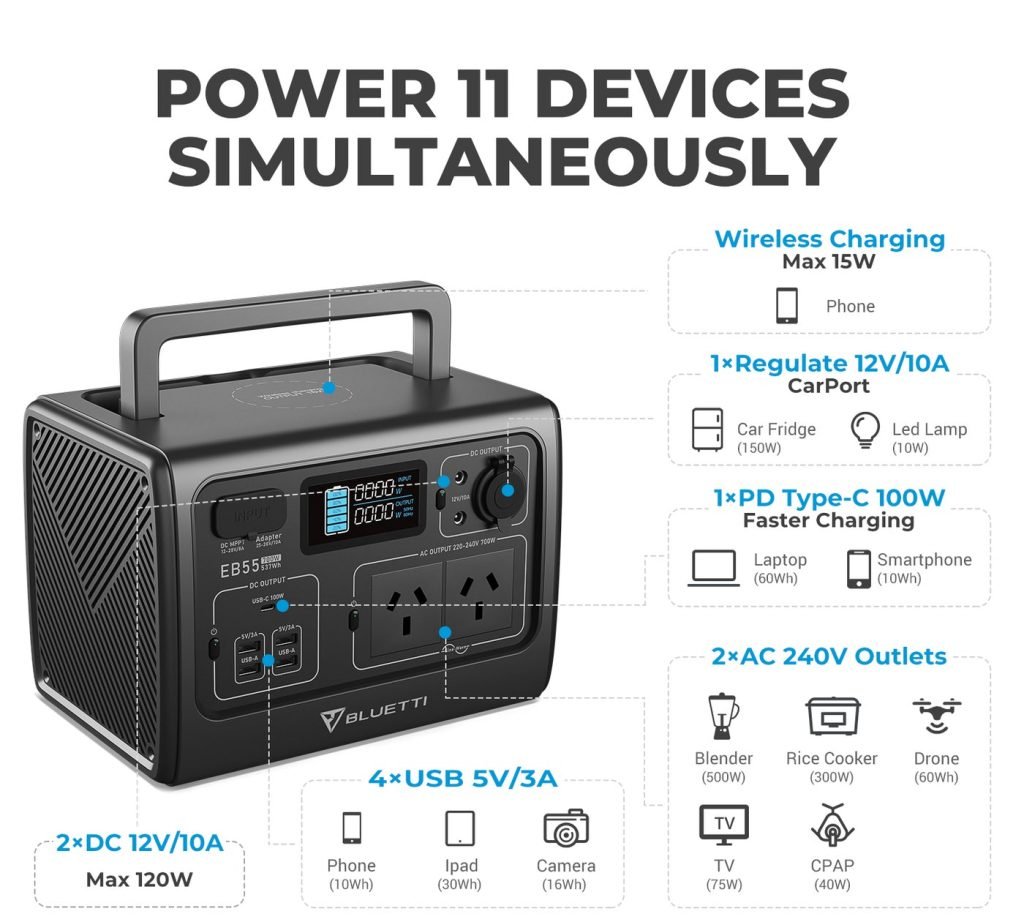 You can also recharge the EB55 from the following list.

So, what comes in the box?

First up, the EB55 has an easy to use interface with individual isolation switches for the various plug in points. Plugging in to 240v initially to fully charge the device I found the inline transformer unit quite noisy but nonetheless it does its job. 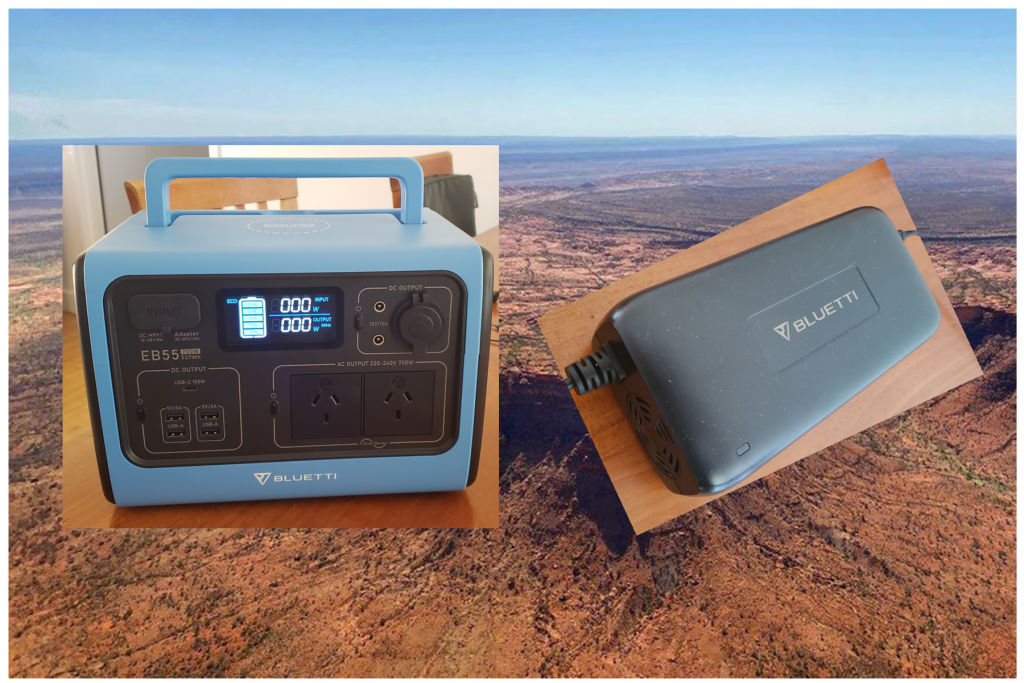 To test the EB55 I plugged in my Mavic Air drone battery charger, an iPad mini and my Ultimate Ears Bluetooth speaker. Being away from home at the moment I couldn’t try everything out but what I did worked, almost.

First of all I had a little difficulty plugging in my drone charger but not the 240v adaptor for the iPad. Ever so slight differences in the prongs (like I could barely see the difference between them) caused the problem but with a little bit of realignment using my Leatherman this fixed the issue.

Thinking it might be the protective cover on my phone I removed this and still no change or should that be no charge! I must admit that this was a function that I thought would be handy for me.

I’m left wondering if this is a fault of the EB55 or my phone, but in saying this, I have used a wireless charger in the past.

This aside everything else worked as it should and, importantly, I found it made charging my drone batteries much more efficient and practical than the standard 240v outlet in my Prado. The other function, that being able to charge from a solar source, I could not test as due to the recent flooding in outback South Australia I still haven’t received the solar panel I ordered.

Apart from being able to charge or power many other devices another option comes to mind. An increasing number of our readers use CPAP machines whilst travelling.

If you require one of these and don’t have an auxiliary battery setup in your car then a power supply like this might come in handy. Bluetti claim this EB55 will keep a 40w CPAP setup going for 11 hours.

How useful will an EB55 be for you?

As mentioned above if you don’t have an auxiliary battery setup in your vehicle then an EB55 or similar type of power bank may suit your purposes. As I said they are light, easy to pack and can charge or power a wide range of devices.

Another benefit is that you are able to shift it from car to car, carry it with you as a portable device or even use it at home out under the verandah. It also has a quick recharge time in case you need to top up! 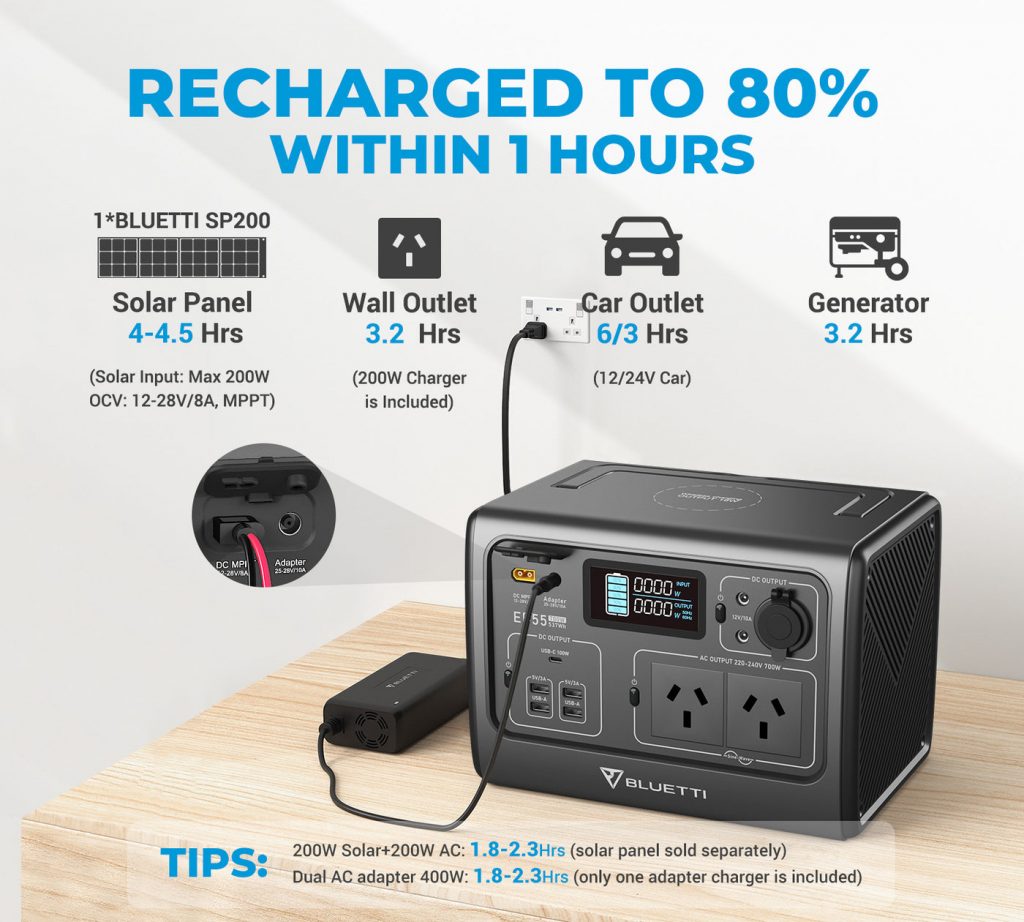 As always necessity is the main reason you would buy something like this, ie you’ll have a purpose in mind. For me however I have an auxiliary battery setup so something like the EB55 is simply another thing I have to carry in an already loaded touring vehicle.

Yeah sure, some of the features would be handy every now and again, but not always and not every trip. If you find that your reasons might justify one of these then give the Bluetti EB55 a go, it’s not perfect but overall it seems a good power supply for short term use.

Looking for something with more capacity then Bluetti has other power options here.