If you’re visiting Coober Pedy, then you just have to stay underground – just once!

Many of the town’s residents live in underground houses to escape the extreme summer heat and the total lack of shade (there’s few trees in Coober Pedy), so why not do what the locals do, and sleep underground? 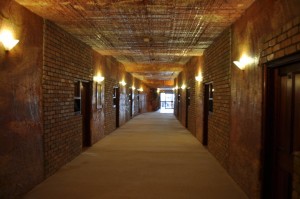 Whilst you might think it’s claustrophobic to stay underground, we can assure you that most places we’ve stayed in are quite spacious.

And let us tell you, after driving in 47 C degree heat, it’s sheer pleasure to escape to 23C, which is the steady temperature underground.

Coober Pedy is the capital of underground hotels in Australia, so there’s a huge range of accommodation to suit every budget.

You can even camp underground!

As we’re pretty budget conscious, we’ve made sure that this page starts with the least expensive underground accommodation first.

If you’re looking for budget underground hotels or backpackers accommodation in Coober Pedy, then Radeka’s is definitely worth a look.

What’s more, Martin who runs Radeka’s is one of the nicest, most hospitable guys you’ll ever meet. He looks like a real bushy with his long grey garden-gnome beard, but he’s a true gem.

He helped Amanda out in 2011 when a car she was driving back to Alice Springs broke down, coordinating calls between Alice and a vehicle recovery service in Coober Pedy.

Like many other underground hotels in Coober Pedy, Radeka’s was once a real opal mine. It was converted to a motel in the mid-1980s and has 10 Motel rooms, 12 Budget Rooms and 12 Dormitories.

There’s also a cosy bar area right near the reception, which we found was a good place to chill out and chat to other travellers.

We’ve stayed at Radeka’s in the budget rooms. We found them a little squishy for a family of 4, so the ordinary motel rooms would be a better choice if you’re travelling with kids.

As we were there in the summer, we also found that the room (it was right at the front of the dugout) got a little hot and we had to use the air con.

However, we need to point out that we stayed there in mid-January and it was 43 degrees outside -falling to only 40 after dark! Even we -hardy outback locals- were surprised!

Amanda has also stayed in a double budget room, which again was a little small, but fine for one person. The only drawback was that there was no ensuite in the room, so you need to use the share bathrooms. These were very clean and tidy.

The backpacker’s dorms are a little unusual, in that the ‘rooms’ are really alcoves with bunks within a single dugout space. In between each ‘room’ is a piece of board.

Privacy in the dorm rooms is via a curtain, so if you’re a light sleeper, these rooms might not be your cup of tea as the board forming the walls doesn’t go all the way to the roof and you can hear other people talking and snoring!

The communal kitchen at Radeka’s we found to be very large, clean and well equipped. We’ve made a video of it below to show you exactly what to expect.

Find the best deal, compare prices, for Radeka’s and read what other travelers have to say. 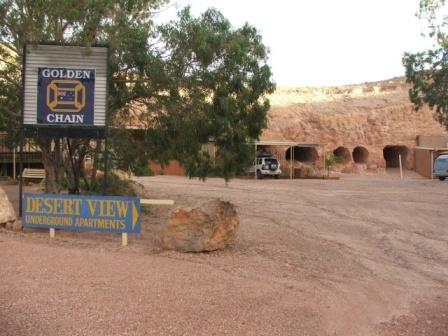 The Desert View has both underground apartment and cheaper motel rooms.

The motel has eleven 2 and 3 bedroom, fully self contained, underground apartments.

We’ve stayed here once (2010) and can say that the hosts were very friendly and that the rooms were BIG.

Read what others have said about the Desert View and get the BEST deal on accommodation. 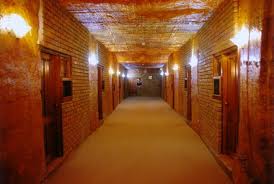 The Lookout Cave is in a quiet, peaceful location with one of the best views in Coober Pedy. You can see incredible desert sunrises and sunsets from the motel’s elevated location that looks right over the town and surrounding area.

All motel units are underground, and there are several self contained units.

Continental breakfasts are available and there is also an opal shop onsite.

Self contained units have 2 bedrooms, a living area and fully equipped kitchens.

Motel Room rates start at $95AUD for a double. Each extra person is $20 per night. 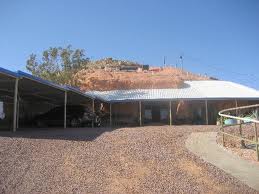 The Underground Motel has fantastic views of the desert and the Breakaways. It’s a great place to kick back, watch the sun go down and relax under the stars with a cold beer.

There are six standard rooms with ensuite shower/toilet, TV and direct dial phone. There’s a shared guests’ kitchen which you can use if you’re staying in the standard rooms.

Rates for standard rooms are AU$110 per room/night, for Double or Twin.

The Underground Motel also has 2 Suites, which have a private kitchenette with fridge, microwave, toaster and kettle.

The rates include a complimentary continental breakfast with provisions provided for self service (available from the early hours of the morning).

And don’t forget – you can also camp underground. This page has more information on underground camping.

Ok. These hotels here are not for the budget conscious. But they are VERY nice.

The Desert Cave is probably the best known of the hotels underground in Coober Pedy, simply because of its central location. If you’re looking for 4 Star accommodation, then this might be the place for you.

There are 50 rooms, however, only 19 are underground. The rooms all have TV, hair dryer and iron, mini-bar and refrigerator, and tea and coffee making facilities.

The Desert Cave isn’t budget accommodation. Room rates start at $225 for a double/queen room per night. Extra people are $35 per night.

You can go opal shopping at the Desert Cave’s Opal World shop (offers a 10% discount for hotel guests), see an award winning historic display on mining, opal and life in Outback Australia and have a coffee at the Crystal Cave café.

All of The Comfort Inn’s rooms are underground and feature a queen size bed and ensuite.

You can ask for up to an additional 3 single beds as required. The rooms have a hair dryer, complimentary toiletries, a kitchenette with microwave, toaster, kettle, tea and coffee.

Room rates start at $185 AUD per night for a double/queen size room. Extra people are $25 per night.

The Comfort Inn also has a shop where you can buy opals, The Opal Room and a display of opalised fossil sea shells, old mining tunnels, opal seams and local Aboriginal art.

Best of all… there’s an underground café with yummy coffee and food. We thoroughly recommend it. The café also has a quirky name: the Underground Soft Rock Café.